Reeve Schumacher, #1, from the series Nothing but Blue Skies, 2016.

Nothing but Blue Skies is a multi-media exhibition at the Chapelle Saint-Laurent le Capitole in Arles curated by Mélanie Bellue et Sam Stourdzé. The show looks back at the media’s portrayal of the tragic events of the morning Sept 11th 2001 in New York city. The title come from the intensely blue sky on the day which formed a common backdrop to the mass of imagery produced and disseminated.

Over 20 artists have contributed photos, video and installations in order to question “the visual representations of the tragedy over a nearly 15-year period”.

The result is quite overwhelming. The show entrance contains large format photos of the impacts showing flames and smoke – the news photos that we’re familiar with. In the next room there is a hand-held silent video which just lingers on the burning building like a curious type of voyeurism. There’s a separate room which contains dozens of TV screens, each showing different TV broadcasts from the time in multiple languages – a true cacophony. 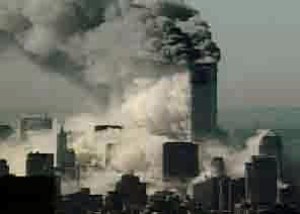 For me, perhaps the most memorable photo was one of Thomas Ruff’s JPEGs series titled jpeg ny02. The slightly unreal nature of the pixelated blocks matched the surreal nature of the event – almost as if, even 15 years after, the event is so hard to take in that it’s easier to work with an abstract view.

Not an easy exhibition, but certainly one that stirs the emotions and brings back the incredulity of that day.

This is the learning log for Darryl Godfrey for the OCA Expressing your Vision course.