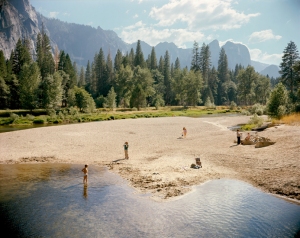 This post was inspired by an article in the August 2016 edition of the British Journal of Photography which focuses on photography education. One of the articles is about Stephen Shore and his photography programme at Bard College in New York.

The article contains a number of Shore’s photos from 1969 to 2011 but mentions one in particular: Merced River, Yosemite National Park, California, 1979. The article states that the photo is a good example of how Shore’s images “make us look again at sights we usually take for granted … and all with a beautiful light and colour palette”. The article goes on to say that the photo has many visual and intellectual layers of meaning. This point about layers of meaning intrigued me enough to think about to decode these layers.

Ansel Adams: The Tetons and the Snake River, 1942

The most obvious starting point when thinking about meaning for this photo is the surroundings: Yosemite National Park. Made famous and, one could argue, partly created by Ansel Adams. The two are inseparable. The BJP article mentions that the photo “can be read as both an acknowledgement of, and respectful shirt away from, the iconic Ansel Adams landscape photograph, The Tetons and the Snake River, 1942“.

In fact, this particular Adams photo seems like a strange reference point. It’s full of drama, printed in a high contrast way and dodged and burned to focus the viewer’s attention. By contrast, the Shore photo is almost pastoral. Adams made many photos of the Merced River which would have serve as better comparisons, capturing the serenity of the scene.

One such example is Merced River Cliffs, Autumn, 1939, presented in Adams (1983). This photo shows the mastery of light that Adams was famous for. Like Shore’s photo, it is also a peaceful scene.

Another obvious layer of meaning is Shore’s use of colour compared with Adam’s use of monochrome. The article quotes Shore as saying that “everything but art photography was in colour, so it made sense to me that colour was the direction I should go in, even if photographers I admired, such as Paul Strand, claimed that higher emotions cannot be communicated with colour”.

Shore’s use of colour removes the abstraction layer of monochrome and roots us much more in the here and now. Even though the photo was taken in 1979, there is nothing particularly which dates it – we could imagine it has having been taken this morning on a smartphone – it has a feeling of being contemporary.

None of Adams most famous photos feature people, even as nondescript bit-actors. Looking through Szarkowski (2001), I could find only a single photo of a person, taken 1928-29 titled Eagle Dance, San Ildefonso Pueblo, New Mexico. We have better luck in Adams (1983) where there are seven photos of people of the 40 discussed. The landscape for Adams had became a political message to support the preservation of wilderness areas. For this reason he wanted to emphasise the beauty and minimise the human element.

By contrast, Shore’s photos frequently contain people – by no means all of the time, but often. This is part of Shore’s desire to show people in the world and how “nature is occupied by humans” (Grieve, 2016).  Badger (2014) comments on the same photo by saying “he has accepted that where nature is, man is also, but that does not prevent him from making his own version of the American Sublime, for if he can find it in a suburban gas station or motel he can surely find it in Yosemite, albeit tinged with gentle irony”.

At this point I thought it would be interesting to try and put myself in Shore’s shoes and use his own method to analyse Merced River. In The Nature of Photographs (Shore, 2007), three levels are suggested for thinking about photos (see my blog article on the book here).

The physical level consists of what we’d normally think of as the physical aspect of a photograph such as the paper texture and colour, the chemistry, the border, whether it is monochrome or colour etc., but it also includes the context: the presentation.

From the physical perspective, the photo is in colour and is presented on glossy, high-quality paper in a quality photography journal. The effect is engaging, especially since it is presented at the top of a right-hand page, where the eye naturally falls. The context of a serious journal implies that I should take it seriously as well.

The depictive level is about the choices that the photographer makes in terms of vantage point, framing, choosing a moment of exposure and a plane of focus (along with depth of field).

The vantage point is moderately high, looking down on a curve of the river and on the mothers and children, one of which is standing in the shallows. The framing places the people just slightly to the right and below the central point. The framing seems to have been chosen to include the water, people, mountains in the background and some of the sky to show the context without any single element dominating – in rough terms, each element of the landscape is balanced with the others in terms of size.

The people are moderately far away. In the half-page magazine print, some detail can be seen, but the people are very small compared with their surroundings. Perhaps Shore was trying to show people as part of the world, but maybe not the most important part. The depth of field is very large with sharp focus throughout. This is a scene as we might see it ourselves.

Finally, from a time perspective, the people are static – frozen by a relatively fast shutter speed. There is no motion blurring, nor any sense of a decisive moment. It’s easy to imagine that within quite a long time period, one photo would look more-or-less like another with no great differences. In short, time is not a strong element in this picture.

On the mental level there is a sensation of changing focus due to the planes within the photo of water, river bank, trees, mountains and finally the blue sky with white clouds. There are layers within the photo which, I suspect, would become more dominant with a larger print. Printed very large, I can imagine that the effect would be breathtaking.

I can imagine Shore feeling this sense of depth and of space when he took the photo and that these were the qualities he wished to communicate.

The combination of the use of colour, including people and a focus on the mundane versus the drama of a classic Adams photo can be seen as a kind of rebellion against the so-called “West Coast School” represented by Adams, Edward Western, Minor White and others. Shore has humanised a landscape which must seem to be overpowering to many visitors. By focusing on children at play, he also reminds us that perhaps we shouldn’t take ourselves so seriously.

Badger, Gerry (2014) The Genius of Photography: How Photography has Changed our Lives. London: Quadrille Publishing Limited

This is the learning log for Darryl Godfrey for the OCA Expressing your Vision course.